Overview of the quest Revenge of the Bloody Jenny 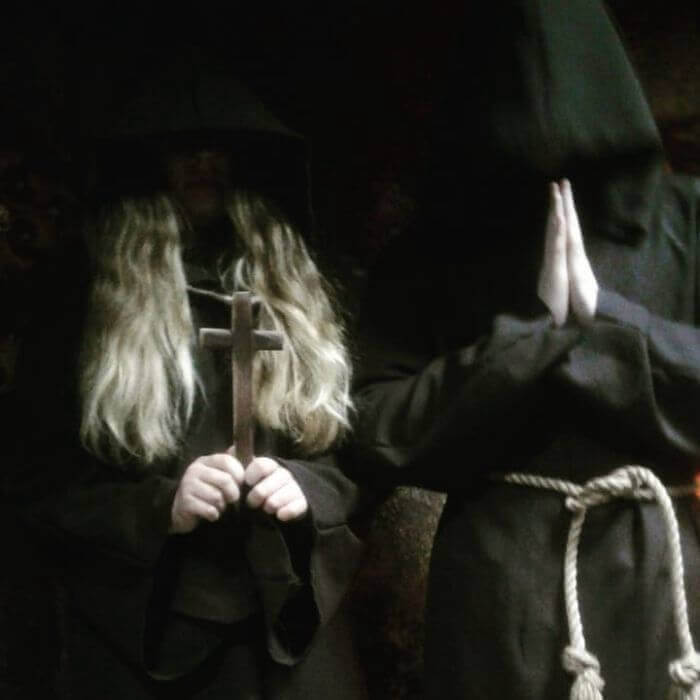 Overview
I must say right away that we are fans of standard quest rooms, and not performances and horror films with actors.
We were invited to visit and try on the quest "Bloody Jenny's Revenge", assuring us that everything will be fine =) and we are absolutely afraid of nothing.
Arriving at the indicated place at the right time on the street, before entering the quest room, a girl in a hoodie (similar to the clothes of an ancient monk) was waiting for us and telling stern voices who we had shown us the way to the basement. The beginning was intriguing, but we all followed her directions. And then the door closed behind us and it started ..
We were led half-darkness into the depths of the basement, the light gradually died out and we were in complete darkness. Feelings began to aggravate, and we thought, but will everything really be all right?
We were seated on a sofa and started to keep up to date with the history of this place and what awaits us. After hearing us one at a time, in complete darkness, they began to lead away to the next room and shackle, fasten or put in shackles, each got something different.
The quest has begun. Somehow we found a barely burning flashlight, with a very dim light, such that one could only see anything by bringing the flashlight almost close to the subject. Slowly they began to deal with what was happening and in a couple of minutes we all managed to free ourselves and find a second lamp. There was still not enough light, but my eyes got used to the darkness and it became easier to navigate.
We will not spoil what is happening, and all our adventures, I will only say that we were able to go through the quest or to correctly present the performance, since this is more entertainment for emotions, to the end in a little over 50 minutes.
Everyone in our team received a charge of bright emotions and a topic for discussion for a while. After passing, we were offered to take a picture with a live owl, and talked about some of the nuances and subtleties of what was happening, which was a pleasant bonus for us.
Generally. For those who want to spend some time and get emotions, but do not want to go into horror and do not want to strain their heads by solving problems and puzzles - this is a good place.
You can see the full information and book the quest Revenge of the Bloody Jenny 2.0
26.09.2019
Other Overviews
Come back