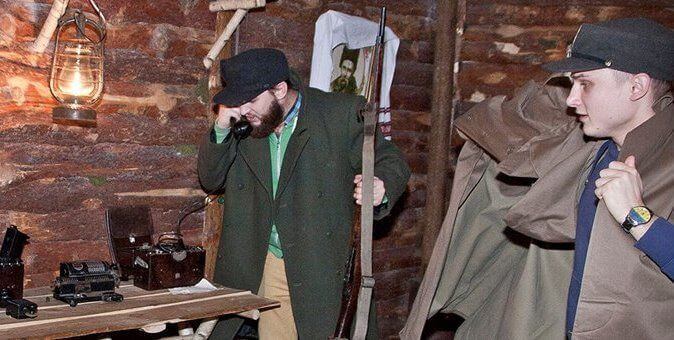 Overview
The next mini-quest on our list was a quest from the Zigraymo company - the Kryivka quest, or as the partisan organizer calls the room.

We went to this quest after the words of a friend who suggested a short list of one-room quests to us, and highlighted some of the most interesting in his opinion (Kryvka, Ward No. 6, Money cards two trunks from Zigraimo, Conspiracy apartment from Vzaperti, Black and white story and Cache Robbie Bucks from Anabiosis).

We already had a chance to visit several quests from Zigraimo, and we fully understood what to expect. We managed to find out that the Kryivka quest, and the entire location on the contract, was originally built by EscapeQuest, which at one time was one of the leaders in Kiev in quests, but then relocated to Lviv (probably there things are more productive with quests =) )

The Kryvka room from Zigraimo quest room is located on Podil near the Zhovten cinema, not far from Kontraktova Square metro station (100 meters from the metro exit), Yaroslavskaya St. 15/23 (in the yard).

A friendly administrator met us in the location, we chatted with him for about 10 minutes and then he launched us into the quest. According to legend, we ended up in one of the huts (a special partisan shelter). Outside 1943. We were concussed, but we need to understand our location and transfer the coordinates to the headquarters.

The quest room is made quite realistic. It feels like we are underground in one of the equipped trenches, the smell of wood, twilight and suitable music have created the right mood.

The quest is not complicated, without any surplus and is built more on the search. You have to search, search and search again. For two players it’s quite comfortable and just for 40-50 minutes. According to our feelings, it is designed more for the men's team, and for a team of 4 players (the organizer allows so much), it can be boring, but this is a subjective matter.

You can see the full information and book the quest Partisans headquarters
01.10.2019
Other Overviews
Come back