Overview of the quest Pirates of the Caribbean Zaporozhye 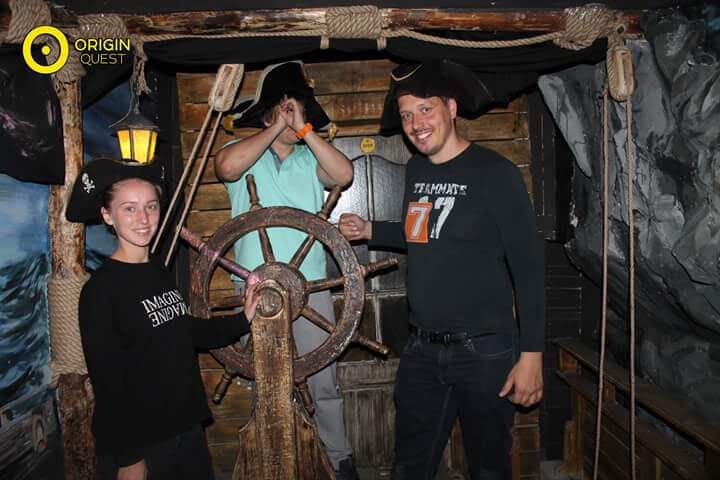 Overview
Quest room Pirates of the Caribbean from the Original Quest in Zaporozhye. This quest we went through a team of 3 people, all adults, wanted to try ourselves in the role of pirates and see what is so interesting can be done in a pirate-themed quest.
We booked a quest on the questroom portal, after which the operator called us back and asked us not to be late =). We arrived on time, by the way the quest is located in the center on Soborny Avenue, very close to Mayakovsky Square.
As expected before the start of the quest, we were instructed and the rules of conduct while in the room. We were also asked to put on bandages, for a greater sense of entourage and involvement.
Each of us was taken to the quest one by one, and after we brought the last player and gave the team to start. Having removed the bandages, we found ourselves in the hold of a pirate ship, next to the Blackbeard, and our first task was to understand what was happening in order to move on.
Everything in the quest seemed so natural and realistic that I think the children here should be very interesting. We were able to move from the hold to the cabin, and then to the deck where the last test awaited us. Unfortunately, we could not cope without prompts, but this did not diminish our impression of completing the quest.
Quest Pirates - multi-room (but the rooms are not large), with a beautiful interior for an old pirate ship. I think that this quest room will not leave indifferent those who love pirate-themed films and, of course, fans of the series with the Jack Sparrow movie.
at this location there are several quests that will suit a large company for both children and adults
After passing the impressions were pleasant and we wanted to quickly go to the second quest, which we did =).
You can see the full information and book the quest Pirates of the Caribbean
26.09.2019
Other Overviews
Come back