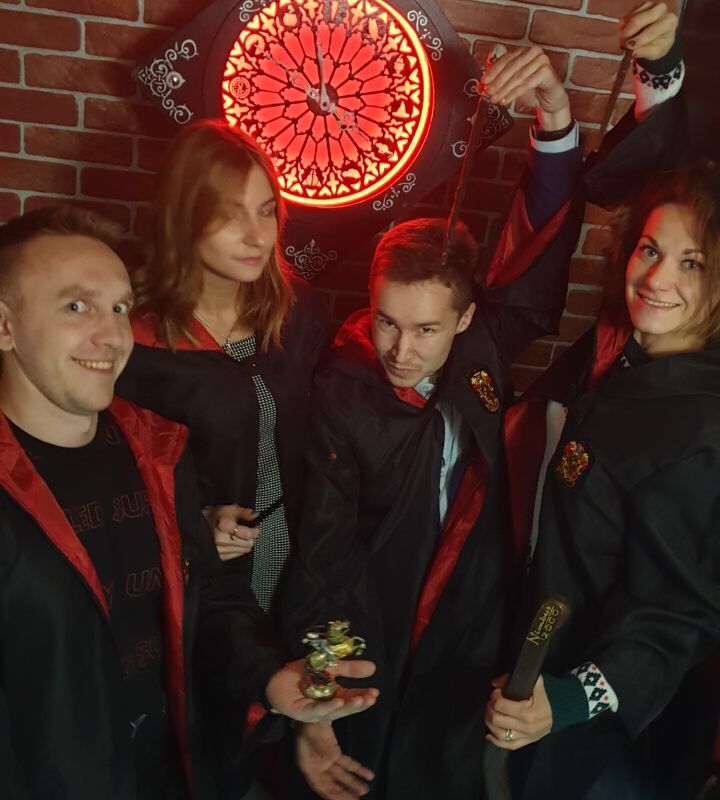 Overview
Escape room Harry Potter journey to Neverland from the provider ANABIOZ. Immediately I would like to draw your attention to the good location of the location - quests in the center of Kiev on the Maidan, Shevchenko Lane 4. By the way, in this location there are 4 quest rooms.
We had a chance to lose in this quest just over six months ago, the feelings remained positive and we got our share of emotions. And so about the quest itself.
The quest is designed for a team of 2 to 5 people, unfortunately for young Harry Potter fans it has an age limit of 14+ due to the fact that the game is designed for an older audience. There are quite enough play rooms in the quest, let's not spoil, but there are more than 3 of them and there are interesting transitions between spaces. Each play space is made in an individual style, with a set of 2 to 4 tasks or puzzles. In general, everything is quite harmonious and balanced, in the spirit of the Potteriana. In the course of the passage, we had to interact with a team, use magic wands, received the staff of Grunn, found a mandrake and much more. We did not even notice how the game hour and a half flew by. Yes, yes, a nice feature of the Anabiosis company quests is that all quest rooms are designed for playing more than 75 minutes, and specifically the Harry Potter quest is designed for 75 minutes, plus, if necessary, administrators can give an additional 5-20 minutes to complete the quest.
The bottom line.
A good quest for 75+ minutes, for the company of adult players, with a lot of rooms.
Our team liked the quest.

You can see the full information and book the quest Harry Potter: Travel to Neverland
20.08.2020
Other Overviews
Come back