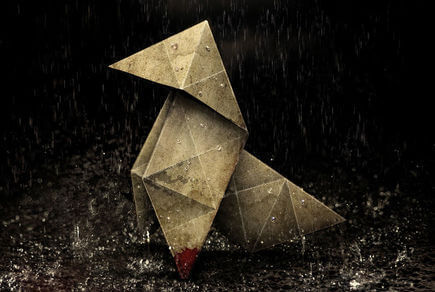 Overview
One of the members of our team had a birthday and we chose the location where several quests are located, which should also be located within walking distance from the metro. Honestly, they were chosen based on the feedback of an experienced quester (questress), who described this quest as something new and unsurpassed, she described such enthusiasm, and the organizer stated that this quest made a splash in the states. After weighing all of us, we decided - "Why not YES." Looking ahead, our expectations turned out to be overstated by the current realities that were in the quest (probably it was necessary to make an adjustment for the tastes of the Americans).
The Origami quest is located 7 minutes on foot from the Poznyaki metro station, we had to go around a bit with the GPS navigator to find the structure we needed and then contacting the administrator, he led us on the phone to the door to the quest entrance, otherwise I think we would have wound a few circles to find the entrance, we hit the spot.
So about the quest. We were led into a dark room, it turned out to be the bedroom of a certain girl whose story we had to find out. Perhaps the quest has already been visited by a lot of unscrupulous teams, and therefore many elements would not hurt to replace or refresh. And to replace some locks with technological little things that are more advanced in time, but here they say it’s a matter of everyone’s taste. We thought that we could master this quest without prompts, but the art of folding by ORIGAMI let us down, but you really have to fold a paper stork (although we had a detailed step-by-step instruction. But for us it was beyond patience and perseverance). As expected in the quest, more than one room and the open door did not come as a surprise to us.
Upon completion, it can be stated that the tasks in the quest are quite simple and not tricky, for beginners this room will be what you need, but for experienced teams it may seem very simple.
Among the shortcomings: - many tasks are not drawn accurately and by hand; - also one mechanism did not work the first time, on which 15 minutes were lost; - the exit was a disappointment and an unpleasant administrator (
P.S. And I almost forgot, this quest will be exactly to the liking of those who love the theme of funerals, coffins and all that.
You can see the full information and book the quest Origami
26.09.2019
Other Overviews
Come back